Ah, the excitement of Dungeon Crawl night! Once a month, the first Wednesday of every month to be precise, the delightful Ben McKenzie & Richard McKenzie hold audiences in rapture as they lead an group of adventures on a journey of D&D proportions!

Admittedly I find watching the ones who don’t know how to play (and have never played) D&D in their life by far the most enjoyable to watch. Each month is a treat to behold with new characters and hilarious storylines  played out at the gorgeous Bella Union at the Trades Hall in Carlton (Melbourne). This month I was invited to have the privilege of being a minion. Woo!

Being a minion was enormous fun and a great challenge. Not challenging in the Improv sense (not at all difficult in this regard) but in the sense of being torn between two worlds: the world of performing and the world of being an audience member! I found myself aching to be in two places at once! Luckily our little off-side area (where Richard waits between each NPC appearance) was big enough for us both to stand and watch from the sides.

It was a thoroughly brilliant night and I urge you all along to the next one- which is Harry Potter themed! The themed ones do not happen all that often but when they do they are just as much fun. 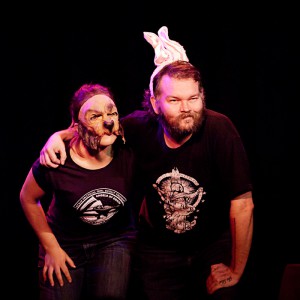 Head to Shaolin Punk for a thorough recap and for more images, the above photo appearing courtesy of Rob Young.

This site uses Akismet to reduce spam. Learn how your comment data is processed.